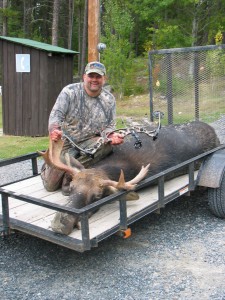 I want to take a moment to tell you of my success hunting this year. I was lucky enough to call in and harvest a bull with a 33” spread with my Bow near Perrault Falls, Ont.. Not world class by most peoples standards, but for me it was a huge first step to consistent success in hunting Moose.

I purchased your Moose Madness Series over a year ago and repeatedly watch it to pick up on as much as I could. Last year we came close to success when I called in a Bull, in the 50” class, to within 10 yards of a family member. As things go with wild game things didn’t fall into place as we would have hoped but the memory is something that will stay with me the rest of my days.

This year’s harvested Bull was only part of the success for me; I also had responses from 6 other Bulls and my brother had 4. I know that this success came because of the techniques and insight supplied by you in your video series.

Preparation for this years hunt started with making my own calling horn, picking up a beef scapula from one of the local butcher shops and constructing “Sarah”, my moose decoy. The scapula and horn both added to this years result; Sarah didn’t this year but it’s only a matter of time before she makes a contribution.

Thanks again for taking the time to produce the Moose Madness Video Series! Regards …….