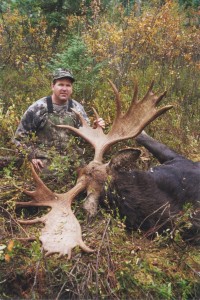 It is amazing to look back on the past 17 years of moose bow hunting with the five guys I hunt with. We have been avid bow hunters for the past 16 years, and each year except one we have been able to harvest a bull or two (19 bulls in 17 years) during our group hunts in the Thunder Bay area. All members of our group have now harvested a bull or two since we began archery hunting.

Basically, in our group we have two sets each of both your original cassette tapes and your new DVDs. Two of us are the callers for our group of guys and we take turns communicating with Bulls during our hunts. The knowledge you share through your initial audio cassette tapes (that I still have ) and now your DVDs is excellent.

Alex, your DVDs have FAR TOO MUCH valuable information to pin point down to specific areas of interest. The ENTIRE series is a “MUST HAVE ” for any moose hunter from start to finish! The three-week archery hunt is a very short window of time to communicate with these thrilling animals. As you are aware, weather and moose attitude can be very unpredictable in this small window of opportunity. You can be in the woods daily with little response and then all of a sudden that magical time frame occurs. By reviewing, digesting, practicing and implementing the techniques and tactics found in the Moose Madness Series, the hunter is much better prepared for this annual Quest to coax a bull moose into shooting range. We are seasoned moose hunters, but many aspects of these DVDs have further educated our group a great deal, and helped explain some past scenarios where we had bulls react differently than expected to the tactics used. You have enhanced our September experiences. You did a great job!