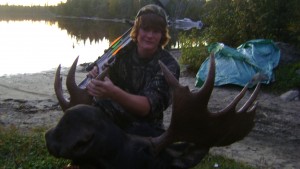 Hey Alex — Thank you for all the moose calling tips you provided in your Moose Madness DVD Series. I also want to share some of the events of our 2011 crossbow moose hunt.

My 16-year old son, Jamie, and I were hunting alone on a lake in northern Ontario. We were hunting the second week of the bows-only season and it turned out the moose were answering calls. Around 5pm on the 3rd day of our hunt we set up in a spruce forest on a 200-metre wide bottleneck of land that led out to a large peninsula. There was moose sign all over the place: tracks, beds and a moose rutting pit. I prepped the area using cow in heat scent and fox urine. The fox urine was placed about a meter away from my son about 4 ft high on a branch.

I started with some cow broadcast calls and then followed up with some cow calls by hand. As it got closer to dusk I made some bull grunts followed by scraping of a small tree with a canoe paddle. I then heard a bull scrape a tree about 80 meters away, then heard him grunt as he moved toward us. When he stopped I broke some branches and made some soft cow calls directed towards the ground as you advise. The bull moved closer so that he was now near my son who was sitting at the base of a tree about 40 meters away from me. It turns out the bull was 3 feet away from Jamie, first smelling the fox urine, and then looking down at him. At this time, I did a couple bull grunts and he started to walk toward me — and Jamie took his shot just as the moose stepped forward – the moose was only 6 feet away!!! It was a perfect double lung shot; the bull simply walked around for a bit, laid down, and expired. After lots of hollering, hugs and high fives we started to gut and quarter the moose and then dragged it to the boat. We didn’t get back to camp until 5:30 am (lots of work for 2 people). the bull was 4 or 5 years old with a 45-inch spread.

Jamie’s bull was taken with an Excalibur Axiom crossbow, and using Firebolt arrows tipped with 125-grain G5 broadheads. I am so glad that just before our trip we sat down and reviewed the shot placement section from your Moose Madness Series. This was Jamie’s first big game animal and he did everything right – I am so proud of him!

Thank you so much Alex.
John B