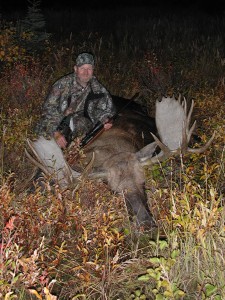 My Alaskan hunt turned out to be a huge success this year. I had great weather and a great guide who put me on lots of game. The day before Moose season opened (my first day of hunting) I shot a nice Cinnamon Phase Black Bear, saw a very nice trophy Bull, and two grizzlies. We went back the next day to look for the Bull but couldn’t locate him. The Moose were mostly in the pre-rut phase while I was there; however, I ended up taking a 54″ Bull on the third day of the the Moose season, and this was a fantastic day for me.

We were out in the flats off of the foothills of the Alaska Range and quietly walking through the birch and aspen woods hoping to sneak up on Bulls that bed in the chest high grass pockets. We walked most of the day before finally jumping a cow and her calf, and later a small bull. As the sun was setting we started heading back to the Argo but had trouble finding it; you might say we were somewhat lost. I was pretty tired from walking when we finally came out onto the trail, and I said to the guide, “You go ahead and get the Argo and I’ll wait here at the edge of these fields and keep an eye out for any moose that may be around.”

As soon as he started heading down the trail I heard some raking in the woods off to my left. I said to myself , “Hey, there’s a bull over there.” I decided to try a few of my well-rehearsed cow calls and throw in a few grunts. I cupped my hands and let out a nice four-count call and sure enough the bull raked again. I then starting thrashing the living daylights of a small spruce tree nearby. After that I tried another call …. this time an agitated cow call. I’ll be darned if I didn’t hear more thrashing but this time on the other side of the trail behind me. Just about that time the guide comes rolling up in the Argo and I explained I thought I had located two bulls…one on each side of the trail. We quietly walked behind us to the edge of the field and saw four bulls hanging out on the edge the woods we had previously walked through. One of them was a shooter but had asymmetrical tines and a busted ear so we let him go. We got to within 80 yards of the group and enjoyed watching two of them involved in a non-serious shoving match. As the light was fading we started on our way back. Just as we got going we could see yet another bull on the other side of the trail back in a field, and started to evaluate him. We put the sneak on him and got to within 125 yards, doing a little raking of bushes as we moved closer. Each time we raked … he raked right back at us. After studying him for about 15 minutes I decided I wanted him and took the shot. It was a hunting moment I’ll never forget. I like to think that my calling and thrashing tactics learned from the Moose Madness videos located those five bulls and kept them around. The guide agreed and said that I had sounded pretty good to him while he was walking down the trail to get the Argo. He said I was really “going at it”.

We saw bulls almost every day of the hunt …. sometimes up to seven in one day. I got some video of one or two bulls that is somewhat decent (after I finally got some steady footage using my shooting sticks for support). I was also lucky enough to also shoot two wolves at close range after stalking them for over or a mile. On the last day of the hunt we went into the mountains looking for grizzly (I had a tag). We saw four but I wasn’t able to connect; but the encounters were really exciting. So there you have it – a great bull moose – a beautiful bear – and two wolves all on the same hunt …. I sure had fun!!!