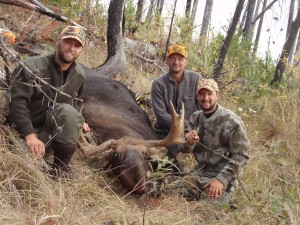 I just wanted to thank you for the Moose Madness DVD’s! I had applied for quite a few years for a once in a lifetime moose tag in Minnesota. Finally, this past spring, I was drawn for a remote BWCA zone.

Preparing for the hunt was intimidating. I have never moose hunted, and only knew one person who has hunted them before. I picked up bits and pieces of advice, but nothing solid. I found your DVD’s online and ordered them. In the months leading up to the hunt I watched your video repeatedly, and fashioned a birch bark call for the hunt. I recorded my moose calls, and played them back, comparing them to your video. I felt very prepared for the hunt, as I set off for my scouting trip a couple weeks before the season. The area I checked out had good moose sign, and everything seemed to be falling into place.

Within a week of returning from the scouting trip, the Pagami Creek Forest Fire got out of control, and shut down a good part of the BWCA, including my entire moose hunting zone. It didn’t look good. For a couple weeks it remained closed. The Wednesday before the Saturday moose opener, about ½ of my zone re-opened, but NOT the area I had scouted. Wednesday and Thursday were spent making calls and researching a new area, and Thursday night my hunting partner, my dad, and I loaded the truck and headed north, prepared to spend two weeks in the wilderness hunting moose in an area we had never stepped foot in.

Opening morning found us in a small meadow off of a lake. Unorganized, cold, and hardly believing we were actually moose hunting, I gave a three part cow call that I had learned from your video. Within 5 seconds we had a bull grunting like mad, crashing through the brush right at us! Absolutely unreal! We couldn’t believe it! Unfortunately, when he was about 50 or 60 yards away, but still hidden from view in the woods, a real cow called and he headed her way. We never did get a look at him.

For the next 5 days we had moose encounter after moose encounter, seeing a total of 17 animals, including 6 bulls. One small bull I called to within 10 yards of us using the techniques outlined in your video. On the day before we shot our bull, the wind kicked up and we could smell smoke from the forest fire. It was very dry, and float planes started to fly a grid pattern around us. Before sunset a helicopter buzzed us as well, and we thought evacuation was imminent. We decided that we had better take the next animal that presented a shot. The next morning after about two hours of calling from our perch overlooking a swamp, a cow and two calves came down the hillside to us. Following them was a small bull, following him was a little bigger bull, and following him was another small bull! After discussing the situation, we decided to take the largest of the three bulls. We pulled the trigger, and after 22 miles of paddling and 11 miles of portaging over the next 2 ½ days we had him back to the truck and headed home. The attached picture shows the bull, with me on the right, with my father Steve in back of me, and my buddy Brian Filkins on the left.

I can honestly say that without your videos, I would have went into this hunt completely clueless. The knowledge gained through watching the Moose Madness Series was so, so crucial to pulling off this hunt! I would recommend the Series to anybody who plans on going moose hunting. Sure, you could paddle around and hope to see a moose on shore, but calling is so much more exciting and effective. Although I originally thought the Series was a bit expensive, your product was absolutely worth every single penny. I’m holding onto it, and someday hope to do an archery moose hunt in Canada at which time I’ll be sure to watch it a few more times.