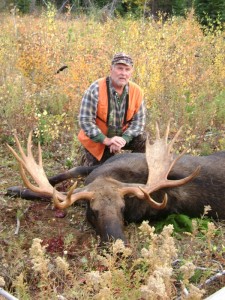 Alex, wanted to let you know I had another successful year using the techniques I learned in your Moose Madness video’s. My Dad (Ed) had drawn a Montana Shiras Moose permit for 2011 for the area surrounding his home, and the area he’s hunted his whole life and where I learned to hunt, but I had never had a chance to hunt for Moose. I called this 54″ bull in on morning three of the hunt while Dad and my brother were hunting a different area. I called him to 25-30 yards and took pictures and then showed them to Dad when we got back together. We were fortunate enough to get him to respond once again that same evening and my Dad made a excellent one shot kill at about 90 yards with his 300 Weatherby. After the drying period it made it officially made it into the B&C records book. Was the best hunting experience of my life calling that bull in for Dad. Thanks again for everything I learned from your video’s, these are an absolute MUST HAVE for anyone who draws a Moose tag.