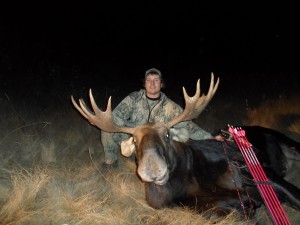 Since 2008 I have been strictly bow hunting and have been successful with taking many animals over the years. In July I found out that my father (Bob Bodnarchuck) and I had been drawn for moose tags in a good zone in Saskatchewan. As I hadn’t hunted moose before I started my search for some good instructional materials on moose hunting & calling and came across your Moose Madness Series. The description of this Series seemed to cover all of the areas I wanted to learn for my up-coming hunt. I bought the DVDs and studied them carefully for a full month before opening day of the season – October 1. It was a wise investment!

My father and I spent the first week hunting together with my uncle Ron Bodnarchuk, and four bulls were called in within bow range for my father. The frustrations of bowhunting didn’t allow shots on the first three, but he finally took the fourth bull down in the last day of his hunt for the season. When it all did come together he was able to see how rewarding it is to take an animal with a bow, and we celebrated his success.

In the second week of my hunt I was by myself and I learned how much more difficult it is when you are both the caller and shooter. I hunted for 11 straight days, was successful at calling in some great bulls, but unfortunately was not able to get a shot off. Frustration was starting to set in!

I decided to go back to an area that had good moose action the first week of the hunt – an area full of deep coulees, heavy bush, and with a creek running through it. After glassing with my binoculars from one of the coulee hills, and seeing no moose that were close, I decided to use two cow broadcast calls learned from Moose Madness Series and after a few minutes I added a few low grunts to simulate a bull answering my calls. I followed this up by simulating a cow moose urinating and proceeded to rake the trees to simulate a bull. After this process I glassed the bottom of the coulee and spotted a bull in the heavy bush approximately 700 yards away. Knowing the wind was in my favour, I decided to get as close as possible on the top of the coulee without being noticed by the animal. As I got closer to the position where I wanted to set up I started imitating walking like a moose and doing some soft bull grunts. I got into position on the top of a coulee finger and proceeded to deliver two agitated cow calls and within moments the bull was 150 years below me looking up. Now that I knew I had his attention, I decided to switch to grunts to challenge the bull as I seemed to have had success with this in earlier parts of the hunt. The bull immediately began to rake the trees and then stopping to listen. I responded by raking bushes as well. He then moved up the hill through the heavy bush, coming straight towards my position. The bull got to within eighty yards and and again stopped to look and listen for me. At this point I did some soft grunts which enticed him to come up closer to me, grunting and swaying his antlers all the way. At this point I knew he was going to come into bow range and I got ready to take the shot. He ploughed through some twelve foot willows into wide open prairie hillside at twenty five yards. I was waiting for this moment with my bow drawn back, and using the hump as a reference as taught in the Moose Madness Series, released my arrow and hit him just below mid chest taking out the top of the heart and lungs. He travelled only 80 yards before going down and expiring. That’s when my celebration began – What an experience!

Alex, thank you for creating such an informative series on how to properly hunt and call for moose. It was one of the main factors in my success this year, and greatly helped in making this one of my most successful and memorable hunts to date. I would highly recommend the Moose Madness Series to any new moose hunters, and also those experienced moose hunters wanting to become experts in their moose hunting & calling.