Angus With His Trophy Bull

In 1968 my Dad took me on my first moose hunt. Since then, moose hunting has become a nearly annual event for me, though about 17 years ago I increased the hunting challenge by switching my rifle for a compound bow.

Prior to departing on my 2011 moose quest I watched your series of Moose Madness DVD’s and the lessons I took from your series caused me to rethink my hunting style. I had drawn an “Archery/Bull” tag and planned to make every possible effort to kill a trophy bull moose.

In late September I flew my small float plane into a remote lake, hunted alone for 10 days and experienced all manner of excitement in the wilderness.

With the lessons learned from the Moose Madness Series and your moose hunting advice in mind I tried and adjusted mournful and agitated cow calling combined with aggressive bull sounds and found remarkable success in bringing in several different bulls. My experience culminated in arrowing a magnificent Bull Moose that has become recognized as the new No.1 Archery Moose for Ontario.

Without the valuable advice and knowledge imparted through the Gouthro’s Moose Madness Series I would not have had the confidence to use such aggressive and other various passive calling tactics during my hunt.

Seeing the consistent bull behaviour exhibited after I followed your instruction has made me very grateful to you for offering invaluable advice and experience through these DVD’s. 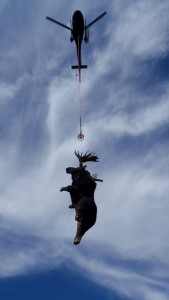 Alex, Thank you for your contribution to my hunting success!

Footnote: Angus is very modest in the way he tells his story. In fact this was an incredible solo hunt, completed by a very professional, determined and dedicated pilot & hunter. What is not said in his letter to me is:

(2) Angus also harvested a 250 pound bear about a mile from his campsite on the same hunt while scouting the island. He shot the bear as it was coming straight for him at 20 yards. After skinning the animal and removing the meat on that spot, he dragged the hide and meat back to his campsite over exceptionally rough terrain. He found his arrow after the shot on the bear and used the same arrow to kill his trophy moose.

(3) The weather was warm on this hunt and after the moose kill Angus knew it would take him many trips in his small aircraft to get the meat safely to a cooler. After gutting the animal, rather than taking the risk of letting any meat spoil he elected to have the moose flown out by helicopter. His trophy became known as ‘The Flying Moose’.
For equipment enthusiasts Angus was using an APA MX2 Black Mamba bow, Carbon Express Maxima arrows with Lumenok lighted nocks and G5 Montec 100-grain broadheads.

To learn more about this incredible story one can go to www.frow.ca/moose/archery and YouTube “Hurkett Flying Moose”

My personal congratulations to Angus!